How to Grow: Hollyhocks 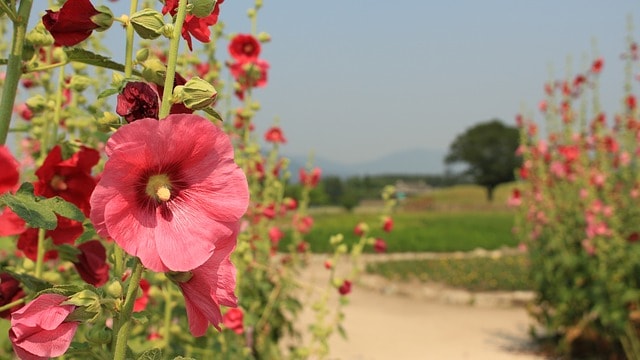 Mature Height x Spread
4 to 9 feet tall and 2 to 3 feet wide. There are dwarf selections as well.

Hollyhocks are classic English cottage garden plants that are favorites of many flower border gardeners. The tall, stately flower stalks yield hibiscus-shaped flowers along their stems that bloom from summer until fall. Hollyhocks are short lived perennials or biennial plants. The short lived perennials will last 2 to 3 years depending on the variety and climate, then will need to be replanted. Biennials mean the first year the plant just grows vegetatively. The second year it sends up a flower stalk, then dies in fall. However, hollyhocks are also rampant self sowers so if you leave some baby hollyhocks in the garden each fall, you’ll have a some in flower each summer. Hollyhocks grow best in USDA zone 4 to 8 climates.

The flowers range in colors from white to deep red and purple. There are single and double flower shapes and although the plants can grow to 9 feet tall, there are dwarf versions that can grow well in containers.

When, Where and How to Plant
Plant hollyhock seeds and potted plants in spring around the last frost date for your area. Plant seeds of tall varieties towards the back of a perennial flower garden. Grow hollyhocks in full sun for the best flowering. Often hollyhocks are grown against walls, buildings and fences to highlight the tall nature of the plant, provide some screening and to give the plants some support. Keep the soil evenly moist for best germination and plant establishment.

Hollyhocks grow best in a well-drained soil that amended with compost. Space plants 2 to 3 feet apart. Thin seeds once they germinate to this spacing, moving the thinned baby seedlings to new locations in the garden.

Growing Tips
If grown in full sun on fertile, well-drained soil, hollyhocks will thrive in most locations. Plant hollyhocks in groups so they can support each other during wind storms and not blow over. Also, plant away from the drip line of a building so soil doesn’t splash up onto the bottom leaves. This splashing encourages diseases, such as hollyhock rust, to begin. Hollyhocks also need good air circulation to prevent diseases.

Support tall hollyhocks in windy locations with stakes placed around the clump of plants and twine or Velcro plant ties used to support the flower stalks. Install these stakes and ties once the flower stalk forms, but before it starts to flower.

Hollyhocks need only compost in spring for fertilizer. If growing on poor fertility soils, also add an organic balanced fertilizer such as 5-5-5.

Plant Care
Deadhead spent flowers to keep the flower stalk tidy and to reduce the incidence of disease on the flowers and leaves. However, to keep the hollyhocks coming each year, let some flowers go to seed to germinate into replacement plants. The baby plants will only be the same shape and flower color of the parents if they are open pollinated heirlooms. Hybrids will have different looking off spring.

Hollyhocks are also a favorite plant of Japanese beetles. Control this pest with milky spore powder and beneficial nematodes sprayed on the soil area where the beetles feed in early summer and fall. These organic controls kill the grub stage of the beetles reducing the adult numbers. Also, hand pick the adults in the morning when they are sluggish dropping them into a pail of soapy water, place Japanese beetle traps 200 feet away from the garden to catch and kill the beetles and use organic sprays, such as Neem oil, to ward them off.

Companion Planting and Design
Hollyhocks are beautiful cottage garden plants, so they pair well with many perennials and shrubs in those types of gardens. Roses, rose mallow, tall garden phlox, delphiniums, peonies, ornamental grasses and foxgloves are just some of the plants that can be grouped with hollyhocks in the garden. Plant clumping plants such as daylilies and geraniums in front of hollyhocks to cover any dying lower leaves in mid to late summer.

Varieties
There are a number of hybrid and heirloom varieties of hollyhocks to grow. ‘Chater’s Double’ is a series with apricot, yellow, pink, salmon, white, violet, maroon and many others colors all with double blossoms. The ‘Queeny’ Series features dwarf plants that only grow 2 to 3 feet tall with double flowers in colors such as white, pink, red and purple. This is a good series to grow in containers or in front of the garden. The ‘Halo Series’ are single flowers with many colors to select. All of these have a white or light colored center. ‘Russian Yellow’, ‘Black Knight’ and ‘Mars Magic’ (red) are just some of the other individual varieties with single blooms and striking colored flowers. The Antwerp Fig Leaf hollyhock is a true perennial that blooms in the first year. It has fig tree-shaped leaves and single flowers bloom in a multitude of colors. It’s also less susceptible to rust and other hollyhock diseases.

Go here for a video on Fall Perennial Flower Care