Charlie’s energy, exuberance, and love of the natural world makes him an exciting public speaker and presenter. He has spoken at national venues such as the Northwest Flower Show, Philadelphia Flower Show, San Francisco Flower & Garden Show, Master Gardener conferences in locations such as Arizona and Michigan, trade shows in Idaho and St.Louis, and garden club meetings from Maine to Florida. If can’t hear him speak in person, consider attending one of his webinars. or virtual talks.

Charlie hosts 3 radio shows in New England. He hosts a weekly, call-in radio show on WJOY-1230AM in Burlington, Vermont, the award winning  All Things Gardening on Vermont Public Radio throughout northern New England, New York and Quebec, and the Connecticut Garden Journal on Connecticut Public Radio throughout Connecticut and into Rhode Island and Massachusetts. He’s also a frequent guest on shows such as Garden American Syndicated Show in San Diego and Vegetable Gardening Podcast with Mike Podlesny.

Charlie is also known for his writing. He has written for national magazines such as Organic Gardening and contributed to many of the “Gardening for Dummies” titles, authoring Urban Gardening for Dummies in 2013 and Vegetable Gardening For Dummies. He has written a national book on edible landscaping called Foodscaping (CSP Press, 2015) and contributed to other book projects such as Vegetables from an Italian Garden (Phaidon Press, 2011) and Gardening Complete (CSP, 2018). His regional books are Northeast Fruit and Vegetable Gardening released in 2012, New England Getting Started Garden Guide released in 2014 and New England Month by Month Gardening, released in 2016. He also wrote The Complete Guide to No-Dig Gardening (2020).

Charlie’s skills as a garden communicator extend beyond the printed page and radio. Charlie co-hosts “In The Garden” tips on the local CBS affiliate television station (WCAX-Channel 3). He’s the former host of PBS’s Garden Smart, reaching more than 60 million households. He has also been a gardening expert on many national syndicated television and radio shows such as HGTV’s “Today at Home” and Discovery Channel’s  “Home Matters”. He was the Edibles Editor for GoodGardeningVideos.org highlighting the best gardening how-to videos in the internet. He also has hosted TV specials such as New England Gardening with Charlie Nardozzi on CPTV.

Charlie is a garden coach and consultant teaching and inspiring home gardeners to grow the best vegetables, fruits, flowers, trees, and shrubs in their yards.

Charlie also works with companies/organizations to provide horticultural guidance on special adult and kids projects. He’s worked with the Hilton Garden Inn on their “Grow a School Garden Project”, Stonyfield Yogurt on their ‘Eat a Rainbow Project”, Gardener’s Supply Company on their GardenMinder app, Velcro.com on their garden blogs, Shelburne Farms and Northeast Organic Farmers Association (NOFA) on farm-to-school programs. For the past 4 years Charlie has worked with and the Vermont Community Garden Network and HANDS promoting school, community gardens, Veteran’s and employee gardens in Vermont through their Green Thumbs at Work and Grow It Trainings.

Charlie also leads Garden and Food Tours in Europe and England to locations such as Sicily and Tuscany, Italy, Provence, France, Chelsea Flower Show in England, and Barcelona, Spain.

He was the senior horticulturist and spokesperson for the National Gardening Association (NGA). He wrote and edited articles for their magazine and on-line newsletters,  conducted media interviews about gardening, and provided horticultural consultation to NGA programs. 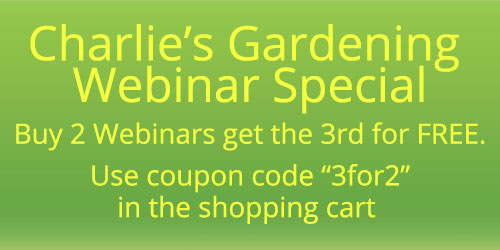