How to Grow: Cucumbers

Learn about cucumbers, including how to plant and grow them. 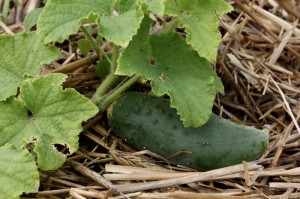 There’s nothing more refreshing than munching into a freshly picked cucumber (Cucumis sativus) on a hot summer day. It’s cool, juicy and thirst quenching. I’ve been known to stand in the garden munching a freshly picked cuke for lunch. Just pass the salt shaker. Traditionally there have been two types of cucumbers you can grow; short and spiny picklers and long and smooth slicers. Now with more gardeners growing cucumbers in plastic hoop houses, there is a new group called greenhouse cucumbers that are long, thin, seedless, and don’t

require bees to pollinate them. They can grow indoors or outdoors, but should be spaced away from other cucumbers outdoors so they don’t unintentionally get pollinated.

Cucumbers are heat and water lovers. Provide them with both and they will reward you with plenty of fruits for salads, soups, and pickling if you like. There are even varieties you can grow that are short- vined making them perfect for containers and small spaces.

Because cukes like the heat, direct sow seed into the garden two weeks after the last frost date in your area. That would be May or early June. You can get a jump on the season by starting seedlings indoors 4 weeks before transplanting into the garden or just purchasing transplants at the garden center.

Cucumbers grow best in full sun on fertile, compost-amended, well drained soil. Since these are trailing plants, plant cucumbers in the front of a garden or on the south-side where won’t be shaded by taller plants, such as corn and tomatoes. They also are great container plants.

Cucumbers love soil temperatures of at least 70F. Because that can be a challenge in our cool climate, grow cucumbers on raised beds covered with black or dark green colored plastic. Build a bed 8-inches tall and 3-feet wide. Lay the plastic over the bed 2 weeks before you’ll be planting to heat up the soil. Poke holes in the plastic and plant seeds 2 inches apart in rows spaced 4 feet apart. Another way to plant is to create a raised circle or hill and plant 4 to 6 seeds. Thin to the strongest 3 seedlings after they germinate.

In containers, plant short-vined varieties such as ‘Salad Bush’ and ‘Bush Pickle’, planting 2 plants in a 12 inch diameter pot.

Protect your young cucumber plants in spring from cold temperatures by laying a floating row cover over plants. Not only will the row cover keep the plants warm, it will prevent insects, such as cucumber beetles, from gaining access to them. Remove the row cover once the flowers form so bees can pollinate your crop. To save space when growing regular 5-foot long vining varieties, consider trellising them. Construct or buy a 45 degree, angled wire and wooden cucumber trellis. Plant the cucumbers at the base and let them vine up the trellis. The fruits will hang through the trellis holes staying straight and will be less affected by diseases. You can also grow them straight up a string like a pole bean. However, the tendrils (curlycues) aren’t strong enough to hold up the plant so you’ll need to tie the plants to the string to keep them growing upright.

Cucumbers need a consistent supply of water to grow their best. Water stress results in bitter tasting fruits. Make sure they have at least 1 inch of water a week, more during dry or windy periods. If you haven’t used plastic mulch, add a layer of straw or untreated grass clippings around plants once they start to run (vine). Keep cucumbers producing fruits by adding a small handful of 5-5-5 organic fertilizer around plants once young fruits form, and again one month later.

This biggest pest of cucumbers are the notorious cucumber beetles. They come in a black and yellow striped or spotted versions. Not only do they attack cucumbers, but they like squash and melons, too. The adult beetles feed on young plants, flowers and even fruits. Their feeding causes the leaves to die and spread diseases, such as bacterial wilt and virus. To control them, cover young plants with a floating row cover, place yellow sticky traps above the plants to trap and kill them, and spray plants with Neem oil or pyrethum.

There are a number of diseases that infect cucumbers as well. Bacterial wilt causes the plant to suddenly wilt even if well watered. Snip the vines to check for a milky white sap as an indication of this disease. Control the cucumber beetles who transmit this disease. Powdery mildew is a white fungus that kills the leaves and can limit production. Spray Serenade organic fungicide to control this disease. In general, look for disease resistant varieties to avoid these problems.

Some good disease resistant, slicing varieties to grow include ‘Olympian Hybrid’ and ‘Marketmore 76′. Some good pickling varieties include ‘National Pickling’ and ‘Little Leaf Hybrid’. Some newer greenhouse types include ‘Suyo Long’ and ‘Tyria Hybrid’. For something different try some of the yellow colored cucumbers such as ‘Boothby Blonde’ and ‘Lemon’. They’re a conversation piece in the garden and have a crunchy texture and mild flavor.

Eating cucumbers is a great way to keep cool during the summer. In fact, cool as a cucumber isn’t just a phrase to describe your personality. The inside of a cucumber fruit can be almost 20 degrees cooler than the outside air on a hot day.

Cukes are easy to grow, but do have two big problems: poor pollination and the cucumber beetle. Most cucumber varieties have separate male and female flowers. They need bees or you to pollinate them to get fruits. If the bees aren’t flying due to hot weather, clouds, or just few of them around, you won’t get proper pollination.

Cucumber beetles not only cause damage to the leaves, flowers, and fruits, they spread bacterial wilt disease which causes the plant to wilt and die prematurely. Control the beetles with sprays of spinosad or pyrethrum.

Now for this week’s tip, want to get the best flavor from your tomatoes? Perhaps add a little sea salt to the soil. Check out the research from Rutgers University at the Vermont Garden Journal on Vermont Public Radio at VPR dot net.