How to Grow: Blueberries

Watch this video on caring for blueberries in your garden including fertilizing, watering and pruning.

Learn about grow and care for blueberries including the best varieties to grow for your location.

How to Grow: Blueberries

I don’t know why more people don’t grow blueberries (Vaccinium). They’re one of the easiest and most beautiful fruiting shrubs to grow in our climate. They have few pests and diseases, can withstand our cold winters, and can produce healthful fruits for 30 years. What else could you ask for in a berry bush? I love walking out during blueberry season and picking a handful 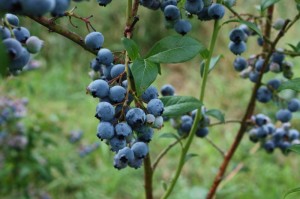 of ripe berries for cereal, fruit salads, or just munching. I’ve grown small blueberry varieties as landscape plants around our home. Not only are the dark green leaves, white flowers and blue fruits attractive, the leaves turn a burning bush-like red in fall. It’s gorgeous!

Plant bare root (no soil on the roots) or container blueberry bushes in late winter or early spring. If just growing as few bushes around your yard, buy container plants from a garden center and plant after all danger of frost has passed. If planting a large number of blueberry bushes, but bare root plants and plant when the soil has dried out. There’s a wider variety and they’re less expensive.

On clay or wet soils, consider building a raised bed prior to plant the blueberries. The raised bed will keep the roots from rotting in cold, wet soils. 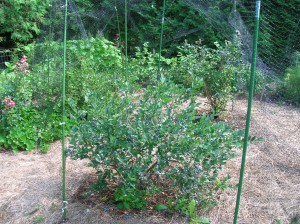 Since blueberries have such delicate roots, mulch the soil around the plants with a 6-inch deep layer of sawdust, pine needles, peat moss, bark mulch, or shredded leaves. This will keep the soil cool and moist, prevent weed growth, and protect the roots from damage. Fertilizer each spring with compost, and an acidifying fertilizer that would be used for rhododendrons or azaleas.

Blueberry bushes won’t need pruning the first few years other than removing dead, diseased, or broken branches. Once it starts fruiting, remove canes older than 6 years old and create a natural progression of 6 to 8 young, middle aged, and older main canes in the bush for best production. Remove any root suckers or thin, twiggy growth.

Blueberries have few insect and disease problems. If the pH isn’t low enough the leaves will turn yellowish. Simply adding sulfur will help. Birds love blueberry fruits. Place bird scare devices around plants or throw netting over small bushes to protect them. Deer will graze on young bushes so protect them with fencing.

Blueberries ripen at different times in mid to late summer based on the varieties. Select early, mid and late season varieties to extend the harvest season from July into September. Don’t be tempted to pick blueberry fruits when they first turn blue. I’ve found they have a tart flavor and often need a few more days to mature to their natural, sweet taste.

Text excerpted from the Northeast Vegetable and Fruit Gardening book.

This native American fruit has been grown here for 13,000 years. It has some of the highest levels of anti-oxidants of any fruit we eat and has been known to help prevent urinary tract infections, heart disease and improve night vision.  I just like eating them in pies, muffins and shakes. It’s the blueberry!

Blueberries are one of the easiest and most popular small berries to grow in the home landscape. The plants range in size from 1 foot to 6 feet tall making them truly the perfect edible landscape plant.

Grow low bush varieties as ground covers along the front of a perennial flower border. Grow half high varieties such as ‘North Country and North Sky under windows along the house foundation. They only grow 3 to 4 feet tall so will never outgrow their location. But if you’re looking for blueberry production, grow the high bush varieties in full sun in the yard. Select early, mid and late season varieties to extend the harvest season from July to September. Plant in well drained soil. Blueberry roots are shallow so they benefit from a good organic mulch such as straw or wood chips. Amend the soil with compost and sulfur to lower the pH to below 5. Add 1 to 2 cups of dried coffee grounds around plants to give them a nitrogen boost. Don’t worry they won’t taste like cappuccino. Protect plants with bird netting placed over them before the berries ripen. Prop up the netting with stakes so you create a little house that makes it easier to get in to harvest and doesn’t tear the leaves and fruits when removing the netting. You can even try running reflective tape, scare eye balloons, and hanging old CDs around the blueberries to scare off birds.

Now for this week’s tip, with all this wet weather get your slug controls in place. Use beer traps, iron phosphate baits, and even raw sheep’s wool around hostas and other plants to protect them.