How to Grow: Canna Lilies

Learn how to select, plant and grow canna lilies.

How to Grow: Canna Lilies

mid to late summer in colors such as pink, salmon. red, and orange

Canna lily is a tropical bulb that grows quickly during our warm summer to produce tall stately plants with banana-sized and shaped leaves. From the center of the leaf whorl emerges a flower stalk with brightly colored blooms. Cannas can quickly create a tropical, exotic feel in your garden. They aren’t hardy in our region, but grow well in warm ground or containers. I love growing them in containers because they grow faster and flower sooner, allowing me to enjoy them longer. Even if you live in colder areas of our region and you may not have enough warm days for flowering to occur, the colorful leaves are a show in and of themselves.

Plant canna lily transplants or rhizomes purchased from your local garden center in early summer once the soil has warmed to at least 60F, about the same time you’d plant melons. Plant in full sun on well-drained, moist, humusy soil. Cannas need consistent moisture to grow their best. Amend the soil with an organic plant food when planting. You can also start canna lilies indoors in containers 4 to 6 weeks before your last frost date. Move containers outdoors after all danger of frost has passed or transplant them into the ground. Plant in a bed against a south-facing wall, or along a building to maximize the heat. Plant tubers 4- to 6- inches deep. Space plants 2 to 3 feet apart; closer together in a container.

Fertilize monthly with an organic plant food to encourage more growth. Keep the plants well weeded and watered. Deadhead spent flower stalks and cut back the foliage to the ground in fall after a frost. Tall varieties may need staking to prevent them from flopping over.

Control Japanese beetles that love to feed on the leaves with traps, organic sprays such as pyrethrum, and handpicking. To save the plants for next year, cut back the foliage after a frost, dig up the tubers, remove the soil and let them dry in a warm, airy location out of direct sun. Store in a 50F basement or garage in perforated, plastic bag filled with slightly moistened peat moss. Discard any rotten or shriveled up tubers in winter.

Plant tall canna lilies in the back of a perennial flower border next to other tall garden plants, such as Joe-pye weed and plume poppy. Plant shorter varieties in containers to be used as a focal point on your deck, patio or porch.

This native American, semi-tropical bulb is known for its banana-sized leaves and colorful flowers. Originally the fleshy rhizomes were used as a food crop to make a starchy paste, called achira, which is used around the world. 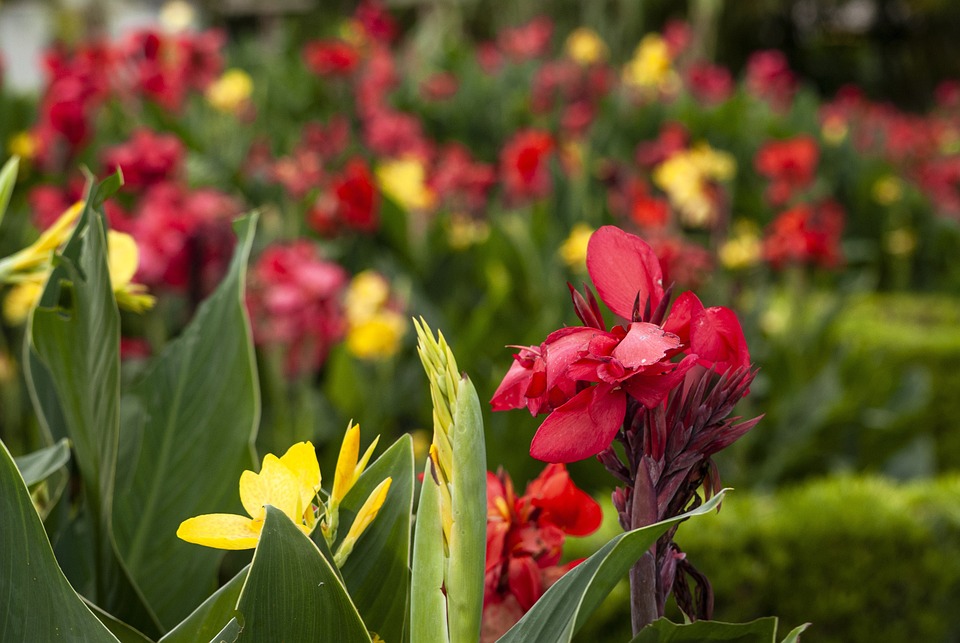 The Vietnamese make cellophane noodles from this paste. The colorful flowers produce pea-sized, black or brown seeds that were used by Indians for jewelry, beads and even shotgun pellets. The seeds also were used to make jute and paper. What is this versatile plant? Surprise, it’s the canna lily.

Canna lilies were popular during the Victorian era. However, with the advent of the cottage gardens around the turn of the 20th century, they fell out of favor. Now they’re making a comeback. I love the huge, colorful leaves as much as the flower stalks because they give me color all summer long. Varieties such as ‘Tropicanna’, ‘Bengal Tiger’ and ‘Red Stripe’ feature yellow, orange, pink or red striped leaves. There are even dark colored leaf varieties, such as ‘Australia’ and ‘Black Knight’, that contrast amazingly with red or orange flowers.

Canna lilies grow up to 5 to 6 feet tall so place them in the back of a border or grouped near a house or garage. Since they come into their own by late summer, I like to plant them behind roses, daisies, daylilies and other perennials to give my border a color boost.

Plant canna lily rhizomes in well-drained fertile soil in early June after the soil has warmed. Give them plenty of water and with the warm weather they will shoot up. I like growing them in containers to give the cannas added height and stature. In fall either leave them to die or dig your canna lilies before a killing frost and store them as you would dahlias.