How to Grow: Culver’s Root 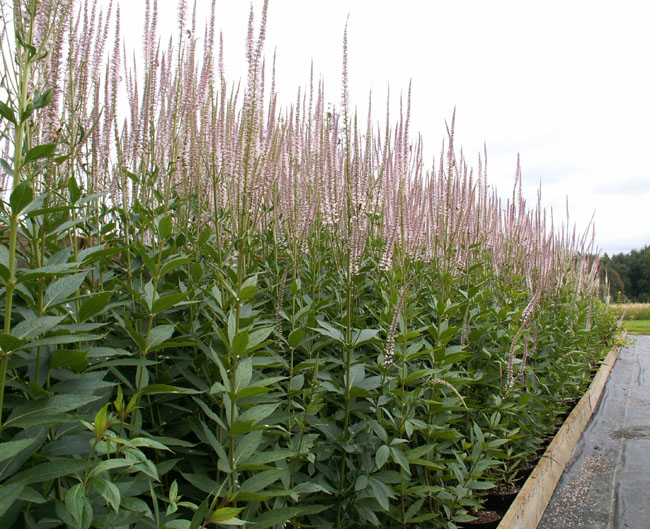 I’ve been enjoying the late summer, tall perennials in ours and other gardens. Perennial flowers, such as ‘Golden Glow’ Rudbeckia, Plume poppy and Joe Pye weed, add a nice backdrop to other flowers and put on quite a show themselves. Plus, many of these tall perennials are natives that help wildlife, bees and butterflies.

One tall, summer perennial that’s getting more attention is a native call culver’s root or Veronicastrum. Culver’s root grows up to 7 feet tall and is adapted to wet soil and part or full sun. It’s in the Veronica family and in late summer produces spikes of white or pale blue flowers that look like candle-abras. The flower spikes are unique since they bloom from the top down. This native plant is a favorite of birds, bees and butterflies. Because it tolerates wet soils, it’s a good plant to grow near a pond, stream bank or rain garden. It also pairs well in a perennial garden. The roots are claimed to have laxative properties when eaten.

Another tall wildflower perennial that blooms late is iron weed or Veronia. Although it has a similar latin name to Veronicastrum, Veronia is in the aster family. This common wildflower grows up to 6 feet tall with dark purple flowers in late summer that turn into fluffy, attractive seed heads. Like culver’s root, iron weed grows well in wet soils and in part to full sun. It’s called iron weed for its tough, rigid stems. It’s not a tall perennial that will flop over in a wind storm. However, iron weed also likes to spread by seed, so if you want to keep it contained, deadhead religiously. If you’re growing a butterfly garden, iron weed is a must since the colorful American Painted Lady butterfly loves it.