How to Grow: Plums

Learn how to plant and grow plums for a northern climate.

podcast transcript
There are so many varieties of plums (Prunus)  available it’s hard to grow just one. I’ve grown the American plums in my USDA zone 4

garden mostly because of their hardiness. European plums are less hardy, but are self fruitful. Japanese varieties can grow only in warmer parts of our region. There are also tart tasting, native plums and plums crossed with other stone fruits, such as apricots and peaches. These are called pluots.

Most plums grow on small-sized trees (12- to 15-feet tall), are productive, and have juicy fruits with green yellow, red, or purple skins and sweet or tart flesh good for eating fresh or used for making jams and jellies.

Plums grow best in full sun on well-drained soils. American and European varieties tend to tolerate heavy clay soils better than the Japanese varieties. Plant on a south-facing slope unless you have late spring frosts. Then, it’s best to plant on a north-facing slope to delay blooming in spring.

Plant standard-sized plum trees 15- to 20-feet apart, semi-dwarf varieties 12- to 15-feet apart, and dwarf trees 8-to 10-feet apart. Dig a hole twice as large as the root ball and plant so the graft union (bulge on the tree trunk) is 2 inches above the soil line. 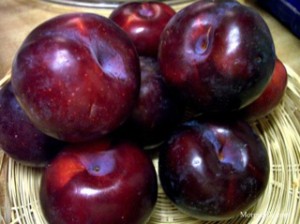 Keep plum trees well watered and weeded. Keep an area 4 feet around the tree clear of grass and weeds during the trees’ young years and make a moat to catch water around the tree. Mulch with shredded bark or straw, keeping the mulch away from the trunk to avoid diseases. Fertilize with compost each spring. American and European plums should grow 12 inches a year, while Japanese plums should grow 20 inches a year. If trees are growing less than this rate, consider adding an organic fertilizer in spring. If trees are growing more than this rate, hold back on additional fertilizer. If the tree grows too much, it produces lots of young growth which is more susceptible to diseases.

American prunes grow in a pyramidal shape and require little pruning other than removing overcrowded branches. European varieties should be pruned to an open center allowing for more light and air penetration into the center of the tree. Japanese plums should be pruned to a central leader system. While most pruning should be done in late winter, prune out dead, diseased, broken branches and water sprouts and suckers any time.

Plums have a few insects and diseases that can cause severe problems. Black knot fungus causes black growths on branches that can eventually kill the branch. Prune out diseased branches in winter below the growths and sterilize the pruners with a 10% chlorox solution between cuts. Choose resistant varieties and clean up dropped fruits and leaves to avoid other diseases. Plum curculio is an insect pest that causes worms in plum fruits. Collect this pest by laying a tarp under the trees and shaking the trees in the morning while the curculios are sluggish. They’ll drop into the tarp and can be easily killed. Protect the tree trunks from girdling by mice and voles with tree wraps.

Harvest plums when they have matured to the correct color for that variety and come off the tree easily with a gentle twist. American and European plums should be left to ripen on the tree, but shouldn’t be left too long because the flesh will become mushy if overripe. Japanese plums can be harvested early and will continue to ripen indoors.

Logan Smith once said, “What is more mortifying than to feel that you have missed the plum for want of courage to shake the tree? Plums are special and second only to apples as a cultivated fruit. There are different types of plums, but most are small trees that fit in any sized yard. The native plum of the Americas is a hardy, tough tree or bush that early colonists found along the shores. The European plum beckons from Russian, and spread throughout Europe and into America in the 1700’s. The Japanese plum is a more tender species from Asia.

The best plums for Vermont are the American hybrids, such as Alderman and Waneta, that are hardy to zones 3 and 4. If you live in zone 5, try some of the European varieties, such as ‘Green Gage’ and ‘Mt. Royal’. It’s best to buy two different varieties within the the same group to pollinate and produce an abundance of fruits. Europeans and Americans don’t cross pollinate each other. Some varieties such as ‘Mt Royal’ are self-fertile, but even it will produce more with a friend growing within 100 feet.

Plums bloom early and are susceptible to late spring frosts. Ideally plant on an eastern-facing slope to delay flowering. Plums are easy to grow, but do have some issues. To prevent alternate bearing of fruits (one year a glut, followed by few fruits the next year), thin plums when small to be spaced 4 inches apart, prune annually in winter and fertilize in spring with a balanced organic plant food. Prune out any signs of black knot disease, sterilizing your pruner between cuts. Control plum curculios by letting chickens feed on them under trees and spraying kaolin clay on the leaves.

Go here for a video on thinning fruits

Go here for a video on bird protection