How to Grow: Pumpkins

Learn about growing pumpkins including some unusual varieties.

Nothing says fall in the Northeast garden like orange pumpkins (Cucurbita pepo). I used to grow pumpkins for my daughter and I would carve her name in the skin pretending it was garden gnomes at work. As the pumpkins grew, so did her name. She was amazed. 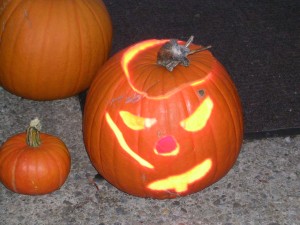 Pumpkins are not just orange any longer. There are white, red, and even blue-skinned varieties available. Some fruits look like Cinderella’s carriage, while others are as small as a tomato. Some varieties grow as large as a truck! You can carve, make pies, and roast and eat the seeds from many varieties. Yes, pumpkins love to run and take up room, but with some planning you can grow a pumpkin patch even in a small yard, with satisfying results.

Pumpkins, like all squash, grow best during warm weather conditions. Sow seeds or transplant seedlings into the garden after all danger of frost has past. That’s usually May or June.

To get the most and biggest fruits, plant in full sun on fertile, well-drained soil. I like to plant pumpkins on the edge of my garden so they can trail off into the lawn. It makes for less lawn to mow and the vines don’t take over the garden. I often lift and train the vines when they’re small, to grow in the direction I’d like them to.

Amend the soil with compost or composted manure. Pumpkins need lots of fertility to grow, especially the large fruited types. In cool summer areas, place black plastic mulch 2 weeks before planting over the pumpkin bed to preheat the soil. Poke holes in the plastic and plant 3 seeds or 1 transplant, 3 feet apart. Thin to the healthiest seedling once they’re all 4 inches tall.

Once the pumpkin vines start to run and again when the first fruits set, add a small handful of an organic fertilizer, such as 5-5-5, around each plant. Keep plants well watered with at least 1-inch of water a week. Weed around young plants and then mulch, if you didn’t use plastic, with a layer of straw or untreated grass clippings.

Watch for squash bugs, cucumber beetles, and squash vine borers in your pumpkin patch. Cover young plants with a floating row cover to prevent these pests from getting started. Remove the cover when flowers form to they can be pollinated by bees. If your pumpkins aren’t setting fruits it could be due to cloudy weather and few bees visiting the flowers. See cucumbers to learn how you can pollinate your own crop. Rotate crops, not planting a squash family crop in that area for 3 years, and use resistant varieties to eliminate disease problems.

Pumpkins need a long season to mature, If you have fruits forming in late September, cut them off and compost them so the pumpkins put more energy into maturing the fruits already on the plant.

Wait to harvest pumpkins until their skin turns the mature color, but before a hard frost. With a sharp knife, cut the stem 2 inches above the fruits and let the pumpkin cure in a warm room for a few weeks. Then let the kids have at it for carving, seed roasting, and decorating. Pumpkins can store for 2 to 3 months in a dark, 50F basement.

For a classic carving pumpkin, you can’t beat ‘Connecticut Field’. It grows up to 25 pounds with a perfect pumpkin shape. For little kids, try the ‘Baby Bear’ pumpkin that only grows to 2 pounds. ‘New England Pie’ is a great pie and cooking pumpkin. ‘Dill’s Atlantic Giant’ is the monster variety that can grow hundreds of pounds large. ‘Lumina’ has white skin, while ‘Queensland Blue’ has a blue skin. ‘Rouge Vif d’Etamps’ is a flattened shaped, French heirloom pumpkin that looks like Cinderella’s carriage.

I recently returned from leading VPR’s Gardens and Food tour of Spain and France. While in Provence I was struck by the pumpkins, or should I say lack of them. The round, orange skinned orbs we love to decorate and paint for Halloween are non-existent. But instead are the red, flattened, cinderella pumpkins. In French, they’re called ‘Rouge Vif d’Etampes’. Our French cooking class chef said they’re the best for flavor. It got me thinking and noticing many different squashes on farm stands and markets right here in Vermont.

When making pies and baking pumpkins for eating, forget about the Jack O Lanterns. ‘Long Island Cheese’ is known for its bright orange, smooth grained flesh, that’s high in nutrients and makes excellent custard. ‘Long Island Cheese’ is an American heirloom and looks like a tan colored wheel of cheese and is similar in shape to the French pumpkins, I saw.

For a pumpkin of a real different shape, try ‘Long Pie’. This heirloom squash features 3 to 5 pound fruits that look like an overgrown zucchini. Picked when the skin is still dark green they’ll continue to ripen to orange indoors. Not only is the flavor great, it’s a lot easier to scoop out the flesh of this elongated variety for cooking.

This year we’re growing a variety of blue hubbard called ‘Queensland Blue’. Hubbard squash are my favorite for baking. They have such rich, sweet flavor. Instead of growing the classic blue hubbard that gets monsterous, ‘Queensland Blue’ only grows 6 pounds in a buttercup-squash shape. All of these squash will last six months or more when stored indoors at around 50F. So do a little hunting this fall when looking for squash and try some of these unusual ones for your fall cooking.