How to Grow: Hardy Kiwi

Learn about selecting the right varieties and how to grow hardy kiwi in your garden.

Growing fruit is becoming more popular and many gardeners are experimenting with some exotics too. Well, it doesn’t get any more exotic in the fruit world than the kiwi. But I’m not talking about the fuzzy, tropical kiwi, but the hardy kiwi. With bald green, sweet tasting fruits about the size of a grape, the hardy kiwi is a tough, aggressive vine that produces fruit in abundance.

Hardy kiwi is a perennial vine that hails from Siberia. If it can grow in the ice box of Northeastern Russia, then you know it can survive in Vermont. To grow them, purchase 1 male for every 8 female vines for pollination. Some good tasting varieties to look for include ‘Anna’ and ‘Ken’s Red’ (a unique red skinned fruit). ‘Issai’ is a less hardy, but self-fruitful variety that doesn’t need a mate and ‘Arctic Beauty’ is super hardy to zone 3 and has colorful pink, green and white variegated leaves.

Grow hardy kiwi vines 12 feet apart on well-drained, fertile soil, in full sun. Ideally plant on an east facing slope so flowers don’t develop too quickly in spring and get subjected to late frosts. These vines love to grow. In fact, some consider them invasive further South. At the time of planting erect a sturdy wooden trellis with 5 foot long cross bars positioned about 6 feet off the ground. Run 4 to 5 wires between these cross bars. Train the vines up to the wires and then along them. Prune heavily each spring removing up to 70 percent of the vines. Be patient. Hardy kiwi can take up to 7 years to produce fruit. But the wait is worth it. Once they start producing bunches of kiwis, they will produce in abundance.

We all know the fuzzy brown skinned, green-fleshed orbs we see in the grocery store as kiwi (Actinidia deliciosa). These can grow in USDA zones 7 to 9. A more widely adapted version is called the hardy kiwi (A. arguta and others). This vine can survive in USDA zones 3. It is a grape-sized, non-fuzzy skinned fruit that grows in clusters. Both kiwis are rampant growing vines. Like grapes they can be trellised and pruned heavily to keep in bounds or grown on a structure for a combination shade and fruit production. I think kiwis are best eaten raw right in the garden, but many mix them in fruit salads and make scrumptious desserts. 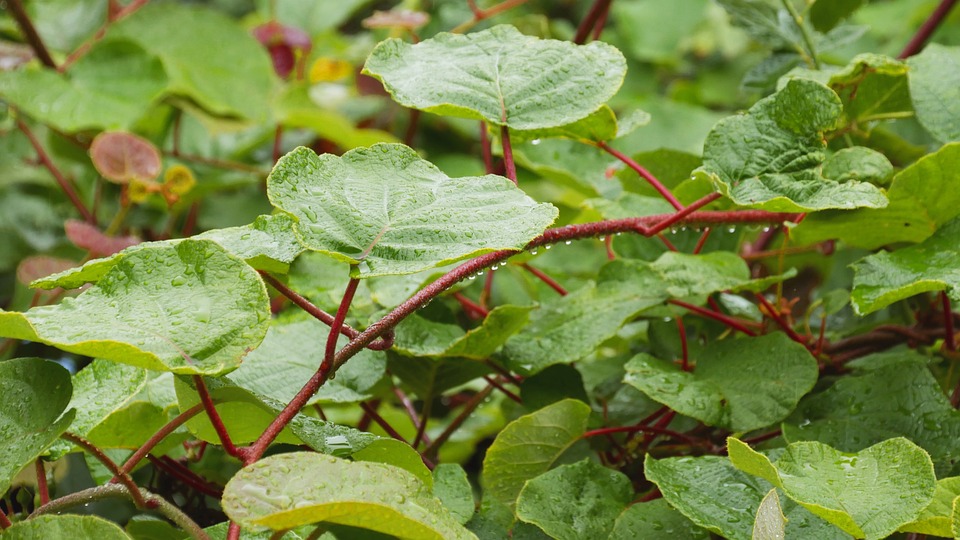 row hardy kiwi on a strong trellised wire fence and prune them vigorously to keep them in bounds. They can grow in small places such as along the edge of a garden, a building or fence. Kiwis can also cover arbors, pergolas and other structures providing shade and fruit.

Almost all kiwis need separate male and female vines to produce fruit. Some fuzzy kiwi varieties for home production include ‘Hayward’, ‘Elmwood’ and ‘Blake’. Some good hardy kiwis include ‘Anna’ and ‘Issai’. ‘Issai’ is self-fruitful and produces smaller kiwis than other hardy types. ‘Ken’s Red (A. purpurea) is a hardy kiwi with red colored skin. ‘Arctic Beauty’ (A. kolomitka) is very cold hardy. The male of this vine has attractive pink, white and green leaves.

Like grapes, kiwis tend to grow best by themselves where you can prune and harvest easily. You can plant lower growing shrubs, flowers and veggies, such as potentilla, bee balm and zucchini, on the sunny side of mature plants to fill in the sometime sparse bottom areas of the plants.

Grow hardy kiwi vines in spring, after all danger of frost has passed, in full sun on well drained, compost amended soil. Grow hardy kiwi male and female vines no more than 50 feet apart for pollination. One male vine can pollinate up to 6 females. Space plants 8 to 15 feet apart.

Kiwis can live up to 50 years so construct a strong fence or structure for them to climb. Train the vines up the fence and in prune in late-winter to remove dead, diseased, broken branches and any branches that fruited last year. Prune back one-year old branches on female plants to 8 to 12 buds. That’s where your fruit will form. Prune back male plants in summer after flowering to stimulate new growth. Kiwis start fruiting within 3 years, but some vines may take longer to get established. Fertilize in spring with an organic plant food. Kiwis have few pests. Protect maturing fruits from birds and squirrels with netting.

Harvest kiwis in late summer or fall before a frost once they have sized up, but are still firm. Let them soften indoors, and if sweet when tasted, harvest the whole crop. If you let them soften too much on the vine they can rot.

Excerpted from the book, Foodscaping (CSP, 2015)