How to Grow: Mulberries

Learn about growing mulberry trees, including varieties and how to plant and grow them.

We mostly know mulberries from the children’s nursery rhyme. Many gardeners avoid them because mulberries can grow up to 50 feet tall and the black fruits can stain walkways and houses. That’s a shame, because by selecting different varieties you can have a mulberry tree that stays manageable and is non-staining. The fruits have the flavor of a sweet blackberry and are good in pies, juiced, or baked in muffins. By selecting dwarf or weeping varieties, mulberries fit perfectly in a foodscape. 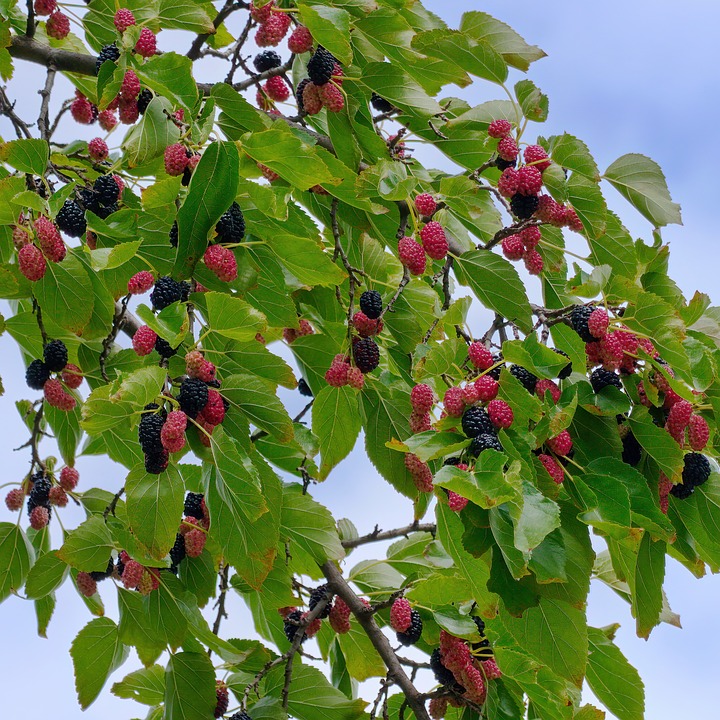 y in USDA zones 5 to 9. Plant large mulberry trees in a meadow or yard away from the house or areas where the fruits may stain. Dwarf and weeping varieties can be planted in a mixed shrub or tree border or in a perennial garden as a specimen shrub or small tree.

Black mulberries (M. nigra) produce the most flavorful fruit but are hardy to only zone 6 and not as widely adapted. Most available varieties are crosses of red mulberries (M. rubra) and white mulberries (M. alba) such as ‘Illinois Everbearing’ and ‘Silk Hope’. These are large trees. For dwarf varieties that stay less than 20 feet tall, try the 6-foot tall ‘Dwarf Giraldi’, 20 foot tall ‘Shangri-La’ (hardy on zones 7-9), and the weeping mulberry that tops out around 10 feet tall. These all have black fruits. A tall, white, non-staining, fruiting variety is ‘Sweet Lavender’.

Large mulberry trees are best grown along the forest edge or in a meadow. However, dwarf varieties fit well in the landscape. Consider planting dwarf trees with other small fruiting trees, such as crabapple and cherry or with flowering trees, such as dogwoods and crape myrtle. Plant weeping varieties in a children’s garden with other edibles such as currants and gooseberries. Weeping mulberries also look great in a perennial flower border as a neutral backdrop to colorful phlox, coneflower, and rudbeckia flowers.

Mulberries are easy to grow. Fertilize in spring with compost and mulch to keep the soil evenly moist. Prune young trees in late winter to develop strong structural branches. To keep tall varieties in bounds, consider summer pruning to cut back the branches and make the tree more of a rounded shape. Mulberries have few pests other than birds. Usually a large tree will produce more mulberries than you and the birds can eat, but for dwarf and weeping types, cover the trees with netting during fruiting.

Mulberries will often drop from the tree when ripe. Place sheets under a tree and shake the limbs to harvest large quantities of the berries or hand pick mulberries once they turn the mature color for that variety. Use them for cooking in pies and making juice. Mature fruits can also be dried for winter use.

This fruit tree is native to China and the leaves are used in the silkworm industry. It’s also the topic of a children’s nursery rhyme, which actually was started as a song sung by female inmates as they exercised around this bush in the prison yard. Yes, it’s the mulberry.

Mulberry fruits are delicious and are making a splash in the natural food world. They are considered a superfruit, higher in antioxidants than blueberries. But most people think of mulberries as a huge tree with black, staining fruits. While some mulberries can grow 50 feet tall and many have black fruits, there are lots of variations. The best types for our climate are the native red mulberry, imported white mulberry and their hybrids. The white mulberry was introduced in colonial times to feed the leaves to silkworms and has escaped into the wild. By the way, the name of the mulberry is not reflective of the fruit color. For example, a white mulberry can have red, white or black colored fruits.

So what to grow? We grow ‘Illinois Everbearing’ a non-invasive, self-pollinating hybrid with black fruits. It’s very hardy and prolific at a young age. To keep its size manageable, we summer prune the branches annually. For a smaller tree, try the weeping mulberry. It stands only 10 feet tall and will produce some fruits.

If you don’t like the black fruits because they stain everything from the deck to your dog, try a pink-fruited variety such as ‘Sweet Lavender’. You can use the birds love of mulberries to your advantage. To keep birds off cherry trees or blueberries, plant a mulberry tree on the other side of your property. They’ll be so many fruits, even the birds can’t eat them all, so you’ll still get some.