How to Grow: Rhubarb

Learn about rhubarb, including varieties and how to plant and grow it.

When I was a kid, I remember picking stems from my grandfather’s rhubarb (Rheum rhabarbarum) plant, coating them with sugar and munching away. The juicy sourness was balanced by the sweet sugar. You don’t need a ton of sugar to make rhubarb edible. Rhubarb makes a great sauce by itself with a sweetener (I now use honey), or combined with strawberries that are ripening about the same time rhubarb is ready to pick. The crunchy, sour flavor of rhubarb blended with the sweet flavor of strawberry is a perfect match in cobblers, pies, breads, and sauces.

Rhubarb is a tropical-looking perennial vegetable that grows 2-feet tall and wide. It can grow for years in your garden with little care. All you’ll need is one or two plants and you’ll have all the rhubarb your family can eat. 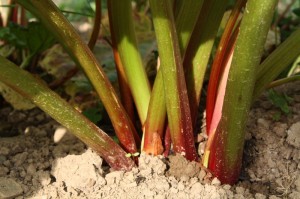 Plant rhubarb in spring or fall while the soil and air is cool. In spring, plant as soon as the ground can be worked and has dried out. Rhubarb grows best with temperatures under 80F.

Rhubarb grows fastest and produces the largest stems if planted in full sun. However, I’ve grown them in part shade and they grow fine, just slower. Rhubarb is an ornamental plant so consider placing it in a perennial flower garden or in front of a shrub border.

Rhubarb loves organic matter. Before planting, amend the hole with a generous amount of compost or composted manure. Plant young plants bought locally or through the mail, so their crowns (place where the roots meet the shoots) are 2-inches deep. Space plants 6-feet apart. Mulch with compost or bark to keep the soil evenly moist and cool.

Keep plants well watered and weeded. Apply compost in spring to encourage more growth. Remove any flower stalks that form by cutting them at the base of the plant so your rhubarb will send more energy into the leaf and root growth. Flower stalks are more likely to emerge when plants are stressed by water, heat, or overcrowding.

Rhubarb are carefree until about 6 to 8 years after planting. They can become overcrowded producing smaller stems and flowering early. Divide the plants in spring, making sure each divisions has a generous amount of roots, and replant in a sunny, compost amended soil. Rhubarb have few pest problems.

The part of rhubarb that is used in cooking is the leaf stem. Remove the leaves and compost them. The leaves are actually mildly poisonous, but the stem behind the leaf is fine to eat raw or cooked. Don’t harvest rhubarb the first year after planting. In the second year, only harvest for 1 week in spring, removing only the thickest stalks. Use a sharp knife to cut the leaf stem at the base. The third year harvest all stalks larger than 1-inch in diameter for 2 months in spring. Use the stalks fresh or chop and freeze them for winter use.

‘Victoria’ and ‘MacDonald’ are two good varieties with green stalks and red overtones. ‘MacDonald’ particularly grows well in clay soil. ‘Canada Red’ has good flavor, but not as attractive stems.

This common edible was first used as a medicinal plant by the Chinese. It hales from Mongolia and likes cool, damp conditions. It made its way to Europe, but wasn’t until the 1700’s that rhubarb was used as an edible. Rhubarb eventually found its way to America and is a staple in many New England gardens.

Rhubarb is one of our few perennial vegetables. It’s long lived, very productive and also makes a nice addition to a perennial flower garden with its large, tropical-like leaves and tall flower stalks.

Rhubarb is easy to grow in full sun on well-drained soil. Avoid clay soils or it will languish for years. Be generous adding compost and water well the first year.

Start harvesting the second year removing the thickest stems or petioles. Don’t eat the leaves, they’re toxic. However, they make a good mulch around plants. You can even boil one cup of chopped leaves in 5 cups of water, strain it and spray it on ornamentals to control aphids and caterpillars.

Remove flower stalks to extend the production. Keep harvesting until early July or until the petioles get thin, but never remove more than 1/3 of the petioles in one year. A different way to grow rhubarb is to force it. In spring, cover the plant before they start growing with a pot to block light. You’ll get more tender, pink-colored petioles. The English are crazy about blanched rhubarb. They force it indoors like Belgium endive. To do so, dig three-year-old roots in fall, place them in containers filled with potting soil and leave them outdoors for a few weeks. Bring them indoors into a warm, dark basement in early November and harvest blanched stems in winter.