How to Grow: Leeks

Learn all about planting and growing leeks.

I’m surprised more gardeners don’t grow leeks (Allium porrum). They are the quintessential “plant it and forget about it” crop. Leek stalks have a mild onion flavor and I’ve harvested leeks 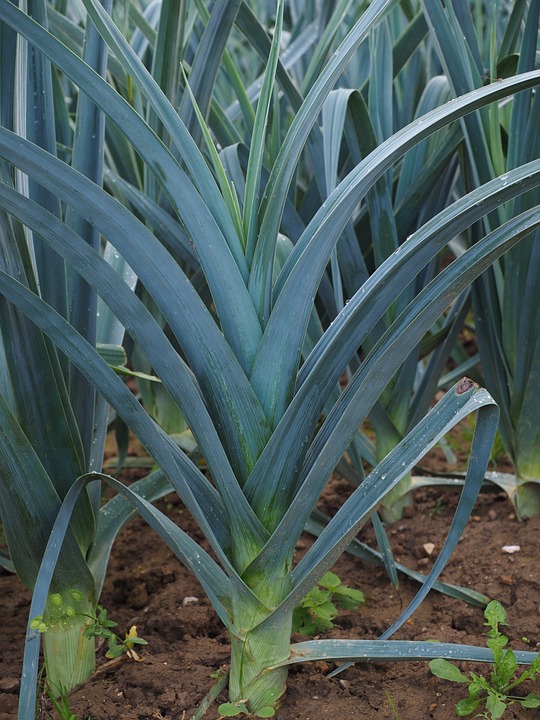 plants that were frozen in fall and they still tasted good. I like to shred raw leeks in salads or saute them in butter. But for the best treat, make potato leek soup. It’s one of my daughter’s favorite garden dishes.

Leek plants are attractive, too. They stand 2- to 3-feet tall and some varieties have stunning blue-green leaves. I’ve planted them among annual flowers to provide a nice color contrast.

Leeks can take well over 100 days to mature from transplanting, so you have to start early with this vegetable. It’s the first vegetable I seed indoors in late winter (8- to 12-weeks before the last frost date), for transplanting into the garden around the last frost date — sometime in May. You also also purchase them as seedlings from your local garden center.

Leeks grow best in full sun on well drained fertile soil. Plant them where they won’t be shaded by other taller vegetables, such as corn.

Keep seedlings indoors clipped to 3 inches tall and fertilized with fish emulsion to create a strong root system. In the garden, amend the soil with compost and build a raised bed if the soil is poorly drained. Dig shallow trenches (4 inches deep) in the raised bed spaced 1 foot apart. Plant the leek seedlings in the trench spaced 6 inches apart. Cover the roots with soil. As the leek grows, slowly fill in the trench. This will help create a strong root system and a white stalk that is mild tasting.

Keep the leeks plants well watered and weeded. Leeks need a constant supply of water to keep growing all summer. Leeks don’t tolerate weeds, but once they get established, their leaves will shade any weeds out. Once the trench is filled in, mound more soil up around the stalks to blanch them further. When watering, try not to let dirt splash into the leaves. The dirt will lodge there and be hard to remove when cleaning in the kitchen. Mulch with straw or untreated grass clippings to prevent the dirt from splashing and keep the soil moist.

Add a small handful of an organic fertilizer such as 5-5-5 per row once a month to form large sized leek stalks. Leeks have few insects or pest problems. Rotate crops not planting any onion family crops in the same location for 3 years to avoid any diseases.

You can start harvesting your leeks plants when they are only 1/2 inch in diameter. However, I think they taste best after a few light frosts. Their flavor is sweeter. You can eat the whole plant, but most people trim off the top green leaves and roots and use the white stalks. These are most tender. I use the green tops often in soups, letting them cook down to become tender. The strong flavor is particularly good when making vegetable stock.

‘Tadorna Hybrid’ is a good disease resistant variety. ‘King Richard’ is a favorite quick maturing variety, but isn’t as cold tolerant as other varieties. ‘Lancelot’ has blue-green leaves and good cold tolerance.

I’m Charlie Nardozzi and this is the Vermont Garden Journal on Vermont Public Radio. Called the poor man’s asparagus, by the French, leeks are a seldom used, but delicious vegetable. Leeks originated around the Mediterranean and have been eaten for more than 3000 years. They are mentioned in the Bible and King Nero of Rome ate leeks because he thought they improved his singing voice. Leek growing spread throughout Europe and Britain and remains popular there. They became the national simple of Wales. King Cadwallader had his men wear leeks in their hats as they marched into war a symbol of Welch army.

I’ve grown leeks for years as one of my “plant it and forget about it” vegetables. I plant in spring, keep them watered and weeded as with the rest of the garden, but don’t pay any more attention to them until now when they are in their glory and sweetening up with the cool fall weather. I start harvesting in September and October and go into winter. I’ve even had leeks freeze solid in the garden, thaw them out and then had them for dinner that night. The flavor is milder than onions and they taste great chopped in salads, sauteed, roasted or to made into my favorite dish, potato-leek soup.

When selecting varieties look for early ones that mature in short season areas such as ‘King Richard’ or hardy types that can withstand the cold such as ‘Tadorna’. I particular like ‘Tardorna’ for it’s blue-green foliage. It’s stunning in the garden. Plant seedlings in spring  in furrows on top of raised beds. Fill in the furrows as they grow and hill them to get more of the mild flavored, white shaft to develop. Keep well watered and weeded. Leeks have few insect or disease problems.