How to Grow: Pears

Learn about pears, including how to plant and grow this fruit.

The soft, sweet flesh of a home grown pear is almost a meal in itself. Of course, I’ll eat them with cheese or in salads, too, but eating pears fresh is the way to go. Unlike other fruit trees, pears like to grow tall, straight in a pyramidical shape. The ones that grow best in our region are European pears. These are hardier than peaches, but not as hardy as apples. Asian pears will only survive in warm

Pears can make beautiful landscape trees as well, especially planted in a tall narrow area. They can grow to 25 feet tall or shorter for dwarf varieties. The beautiful white flowers in spring give way to a multitude of fruits in mid summer. Pears are unique because you have to harvest while the fruits are still firm and let them ripen indoors.

Plant pears in a full sun location on well-drained soils. If you have clay soil, pears are a good choice as they’re more tolerant of heavy soils than other tree fruits. Plant on a slope to avoid late spring frosts from killing the flowers.

Plant standard-sized pear trees 15 to 25 feet apart and dwarf varieties 12 feet apart. Dig a hole twice as large as the root ball and plant so the graft union (bulge on the tree trunk) is 2 inches above the soil line.

Keep young trees well watered and weed free in a 4-foot circle around the tree. Add an organic mulch, such as shredded bark or straw, to keep the soil cool and moist. Prune the tree to a central leader or open center. An open center is better if your variety is susceptible to fire blight disease. It makes removing infected limbs easier. Prune in late winter to shape the tree, creating scaffold branches equally distributed around the trunk. Remove dead, diseased, broken branches, water sprouts (straight growing shoots from main branches) and suckers (shoots from the roots or base of the tree) at any time.

The biggest problem for pears is fire blight disease. The branches look like they’ve been scorched by fire. The disease can spread quickly and kill the tree. Select resistant varieties and prune out fire blight whenever to see signs of it. Place tree guards on trunks to protect the bark from girdling caused by mice and voles. 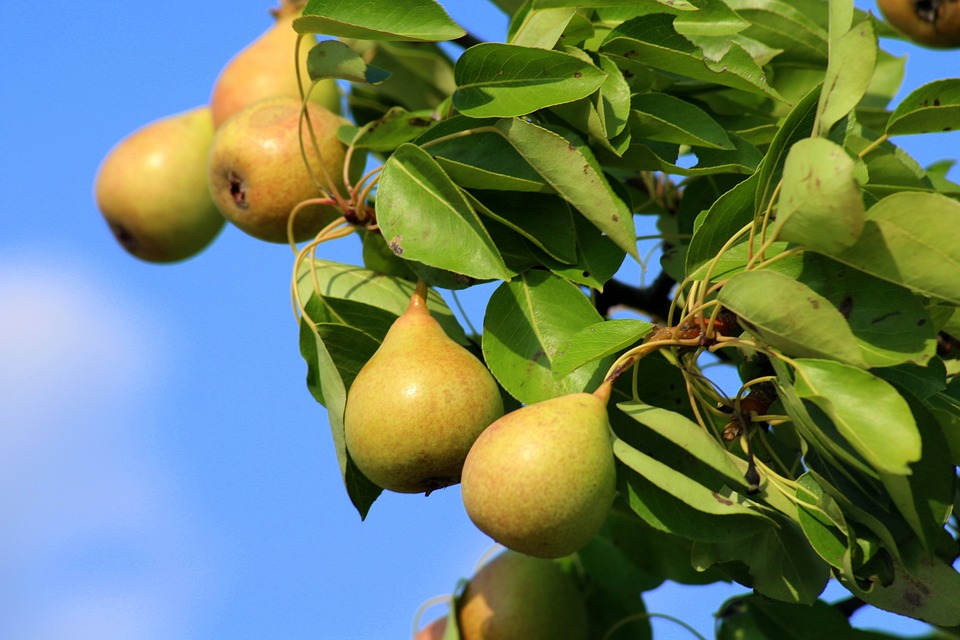 Harvest European pears when they are full sized, but still have a firm flesh. Let them ripen in a warm room indoors. If left on the tree until soft, the flesh will be mushy. Harvest Asian pears when the stem separate easily from the fruits when tugged. Asian pears are eaten like apples.

You’ll need at least two different varieties of pears to get the best production. They usually ripen in late August or September in your region. ‘Barlett’, ‘Clapps Favorite’, and ‘Seckel’ are common varieties, hardy to USDA zone 5. For colder areas of our region try, ‘Patten’, ‘Luscious’ and ‘Summer Crisp’. ‘Shinseiki’ is a dwarf, hardy Asian pear variety to grow.

Pears are an ancient fruit. There’s evidence that pears were known to prehistoric people’s living in Swiss caves thousands of years ago. We New Englanders were planting pear trees as early as the 1600’s. While the commercial industry in our country has shifted to Washington and Oregon because of better growing conditions and fewer disease problems, there are still many varieties that we can grow to enjoy these buttery fruits.

The key with growing pears is finding the right variety and proper growing conditions. While traditional varieties, such as ‘Bartlett’ and ‘Bosc’, can grow in warmer parts of the region, in colder areas look for varieties such as ‘Luscious’, ‘Patten’, ‘Waterville’, and ‘Summer Crisp’. ‘Summer Crisp’ can be eaten like an Asian Pear while it’s still firm. Pears need at least two different varieties to pollinate the flowers. One reason pears don’t fruit well is poor pollination. Pear nectar has only about 10% sugar, compared to apple nectar with 50% sugar, so they’re not as attractive to honey bees. Pears grow best on well-drained, fertile soil. However, they’re more tolerant of cool, clay soils than apples.

Although pears may take 3 to 5 years to start bearing fruits, they can produce for 40 years or longer. Pears don’t need as much pruning as apples. Just remove dead, broken or diseased branches and thin out branches that are overcrowded. Crowded branches can lead to poor air circulation, wet leaves and fire blight disease. Select fire blight resistant varieties such as Luscious’ and ‘Moonglow’ if it’s a concern in your yard.

Pick pears when they’re firm, but not ripe. They need to ripen off the tree. You’ll know it’s time to eat your pears by checking the neck. If it gives when you press your thumb on it and the neck is ripe and juicy, the pear is ready to eat.

Now for this week’s tip, it’s back. Late blight has been reported on tomatoes in Jericho, so scan your tomato and potato plants for signs of this disease and pull and destroy infected plants.